This pattern only has two main branches, Development and Bug Fix. Development is the main branch where all day-to-day coding occurs. Bug Fix is used for coding bug fixes to released code, and also as a staging ground for production releases.

The first step is to create the folder and branching structure. This is done just like in Part III, except for the obvious changes in the number of branches. It should look like this when done: 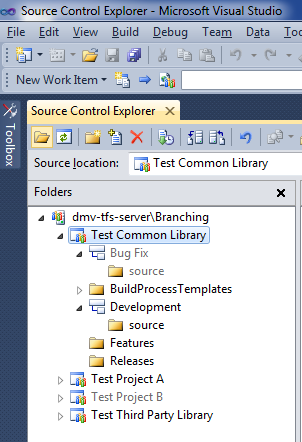 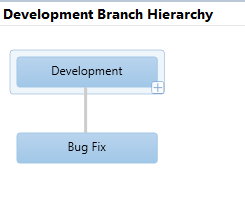 That completes the basic set up. There are four main processes that can happen during an Internal project:
The first part of this, the Development Cycle, is exactly the same as what I covered in Part III for the End- User pattern, so I won't go over that again. 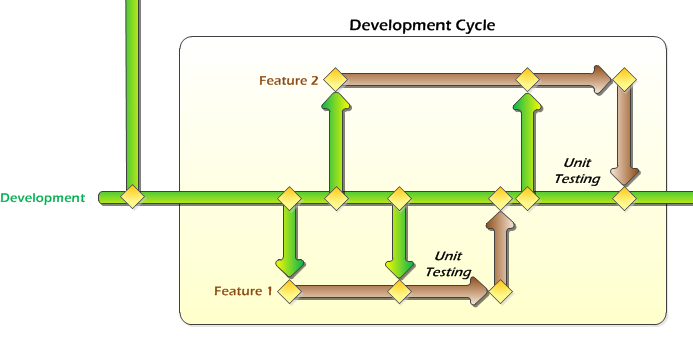 The next part, a Major Release, is slightly different. It looks like this: 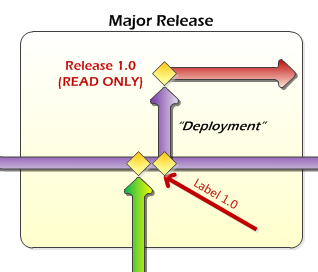 The biggest difference here compared to what we've done before is the presence of the label. The label comes in handy for making bug fixes to older releases, as we'll see in a little bit. To apply the label, right-click on the Bug Fix branch and choose "Apply Label...":

After that, give the label a meaningful name, like "Release 1.0":

Finally, create a read-only branch for the release, just like before. That's all there is to it for a Major Release. 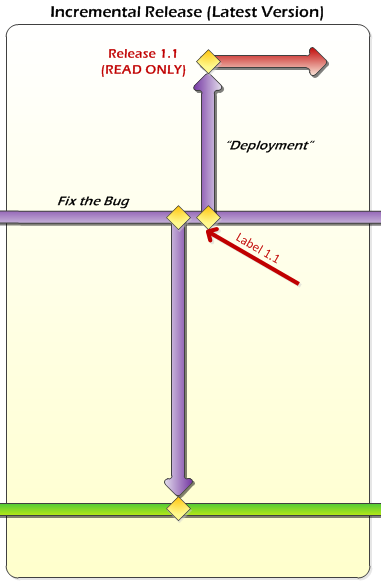 The only other thing left is an Incremental Release, and this is where we'll finally make use of the labels we've been creating. So far up to this point, we've released version 1.0 and a subsequent version 1.1, which contained a bug fix to 1.0. Let's say that now we have a bug in 1.0 that needs to be fixed, but we don't want that fix to be incorporated into 1.1. This is how you do it. 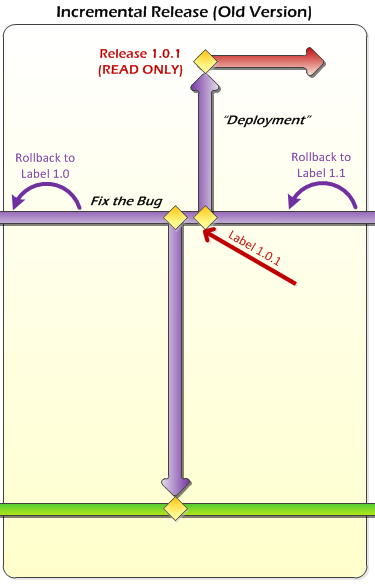 Then make sure you choose the correct label in the correct project (by default Visual Studio searches labels in all projects, not just the current one). 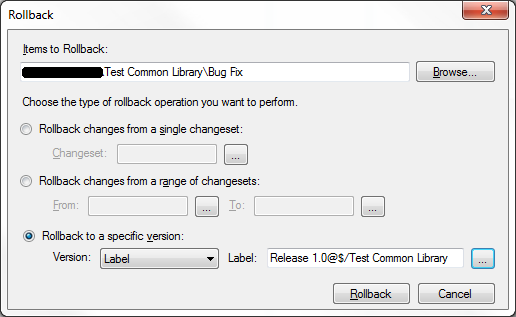 Once this is done, all the code in the Bug Fix branch has been reset back to the Release 1.0 state. At this point, follow the same procedures as a  normal Incremental Release - make your bug fix code changes, test them, and release them into production as Release 1.0.1. Also, merge your changes back down to the Development branch if you want - this step is optional. Note that Development contains 1.1 (or possibly later, unreleased) code. If you want this bug fix incorporated into those version, merge your changes down to Development. For example, if you didn't want this bug fix in 1.1 for some reason, but do want it to appear in a future 2.0 release, go ahead and merge. If you don't, and this bug fix is solely intended for Release 1.0, then don't merge your changes down to Development.

The final step is to rollback the code in the Bug Fix branch (which currently contains 1.0.1) to 1.1. This will ensure that the Bug Fix branch is always left in the state containing the latest released code. Doing this will simplify future releases, both Major and Incremental.

That completes an overview of all the major tasks involved with Internal projects. In the next part, I'll finish up with explaining how to share these common Internal projects across multiple End-User projects.

Here's a slideshow that covers the information in this article:
Branching in TFS 2010 Part IV (Internal Pattern)

View more presentations from jvaran
at 11:59 AM